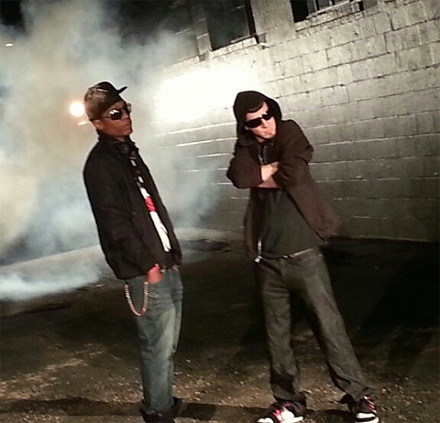 Recently we published an editorial on how CES Cru is helping to usher in a new era of Strange Music tied more closely to Hip Hop’s roots. Then we got to thinking, a lot of people may not know that much about Hip Hop’s roots. After listening to the almost 4 minutes of pure Hip Hop energy that is CES Cru’s new track “Juice” ft. Tech N9ne, we felt compelled to go back into the history of Hip Hop.

Hip Hop is still an emerging art form, and although it’s popularity has grown exponentially in the last 15 years, it’s still not a genre who’s roots are as widely known as say Rock N Roll for example, so we decided to learn y’all a lil’ somethin.

Hip Hop is widely recognized as having four main elements: DJ’ing, B-Boy’ing (or breakdancing), Graffiti, and of course Emceeing. Let’s break it down real quick…

DJ’ing is considered to be one of the most, if not the most important aspect of Hip Hop. It’s widely accepted that DJ Kool Herc effectively invented Hip Hop using 2 turntables and 2 copies of the same instrumental to elongate the beat. This is referred to as “breakbeat DJ’ing”, and is considered to be the blueprint upon which all future Hip Hop was laid.

Up top is a video of legendary DJ Premier working the 1s and 2s. Just remember, the next time you see a 20-year-old kid “DJ’ing” from his iPod…that’s not what we’re talking about.

B-Boy’ing, breaking, or break dancing, is an element of Hip Hop that we really pay attention to, because the Kansas City King himself grew up as a B-Boy. B-Boy’ing is a style of dancing that originated right around the same time DJ Kool Herc pioneered the breakbeat style of DJ’ing, and was a term used to describe the people that danced to his breakbeats. It has since evolved into one of the most difficult and respected dance forms in the world, with several worldwide competitions happening each year.

Above is a video of two-time world champion B-Boy Lilou showing off how it’s done.

Graffiti may have been popularized by Hip Hop in the late 70s and early 80s, but it’s been around in different forms for thousands of years. The first known use of “graffiti” is believed to be in 30,000 BC in the form of prehistoric cave paintings. With the rise of Hip Hop and subway graffiti in New York City, hundreds of styles have been formed and it is now a widely accepted form of legitimate art. Usually people who do graffiti have a “tag” or some sort of identifying symbol that they constantly use, while others like to graffiti abstract works of art and full-on murals.

Check the video above of Allen Leper Hampton performing a bad-ass time lapse tag to see just one of the many styles of graffiti out there.

Here we go, now we’re in familiar territory. Emceeing has come from being a minor and sometimes non-existent accompaniment to DJing, to being the most focused-on aspect of Hip Hop around the world. Emcees, or M.C.’s, used to be the dudes who would stand on stage alongside the DJ or in between DJ sets, and get the crowd hyped. Many forefathers of Hip Hop actually credit James Brown as being the first real “emcee”, although there are others that maintain it was originated in the Dancehall scene in Jamaica. The art of emceeing has become increasingly complex and the main focal point of Hip Hop as a whole, and we don’t mean to toot our own horn but….we have some of the best emcees to ever exist right here at Strange Music.

Case and point above.

So that’s our quick history lesson for y’all. Feel free to do your own research and find your own way to appreciate what we feel is one of the most important and influential art forms to ever develop. Respect the architects, y’all!