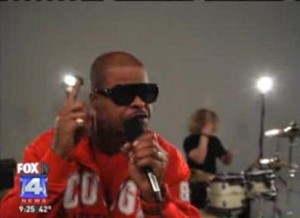 Kutt Calhoun was on Kansas City’s local news station, Fox 4, in a story of his collaboration with Kansas City band Black Oxygen. The respective forces of hip hop and rock came together to form the track “Pressure” which will be soon available on iTunes for all to enjoy. Clips from the music video were in the song along with interviews from David Lyle, frontman/lead guitarist of Black Oxygen and Bloody Kutty himself. Watch below and be sure to leave your comments to let them know that Kansas City has BEEN throwing it down for quite some time, contrary to the reporter’s opening statement: “Kansas City isn’t necessarily known for it’s music.”