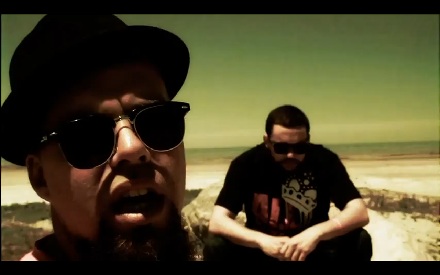 ¡Mayday! recently surprised fans with the unexpected release of their official “Sweat Shop” music video. Shot during the All 6’s And 7’s Tour, the video gets a bit of dramatic and social commentary thanks to the Nevada desert that serves as the video’s backdrop. Wrek and Bernz trade freestyle verses on this fan favorite taken from ¡Mayday!’s Lords Of The Fly mixtape. Nuclear explosions, radiation, and government involvement paint the grim scenes of “Sweat Shop”. Completely shot and edited by ¡Mayday!, the video adds another impressive release to their already extensive résumé.