Dominion is the seventh installment in the “Tech N9ne Collabos” series, but that doesn’t mean it’s anything like the last six.

As the Strange roster continues to expand, as the artists grow and develop, the weight of the collaborative series can be distributed evenly on the shoulders of all the artists. Though Tech leads the charge, appearing on more songs than anyone else, where those songs came from– the construction, and the direction–was left up to the other artists.

Tech N9ne sat down with us to talk all things Dominion and explain how the construction of Dominion is unlike any other album in Strange Music’s history.

What is the process like for putting together a collabos album?

The way we put this album together is a lot different than any other album. Usually when we do the collabos albums, Seven will send me beats, I come up with the concept, I do my verses and give them what the hook should be. This time we thought we should do it differently.

Travis had the idea to have the artists send me the ideas. I was like “Oh yes, I finally get the ups.”  I always send people my verses and they match what I do, I never get to hear their stuff first. I got the ups on this one. They sent me a lot of ideas so it was a different experience, but it was fun to see what was coming.

What would they send you? Ideas? Lyrics? Complete verses?

The first four I got were from JL, they had all the verses and the choruses. They were all bangin’. I did all four. If someone you really admire sends you four tracks that means get on it. It was a great start. Then I started getting stuff from ¡MAYDAY!, Murs, a couple from Darrein, and Krizz threw some in there. At the end, I got some from Rittz. It was a beautiful experience doing this way. We did a lot of music for it. We ended up with around 33 tracks.

Do you think this process bred competition between the artists?

I make sure there’s competition. It keeps me going. No matter what project we do there’s always competition, because we have to rap with or after each other and you know the fans are gonna say who did the best, even though it’s a family affair. That’s the friendly competition. It keeps you sharp. That’s what I wanted and that’s why we got hardcore lyricists on the label.

The new format for Collabos is really exciting! As Tech said, he finally gets the “ups.” Dominion is his opportunity to step to the mic, knowing what came before, and doing his best to top it. As an emcee who thrives on competition, it should bring out the best in him. In fact, he’s already shared what having the “ups” can do. This verse he shared on Instagram? Just take a listen to what inspired it.

The reason why I started my verse off with I! I rap until my tongues tired, I spit it like it’s gun fire! Because of killer mutha fuckin @therealubiquitous ! (THE ANSWER) FEAT. @cescru @krizzkaliko Ubi has the 1st verse and I’m 2nd verse! Wonderful song! TECH N9NE COLLABOS 2017 #DOMINION

As for the rest of the roster, it’s a hell of  a chance, not just to shape the direction of the album to see imagined a come to life, but to earn bragging rights on the bus.

Winner gets the aux cord? 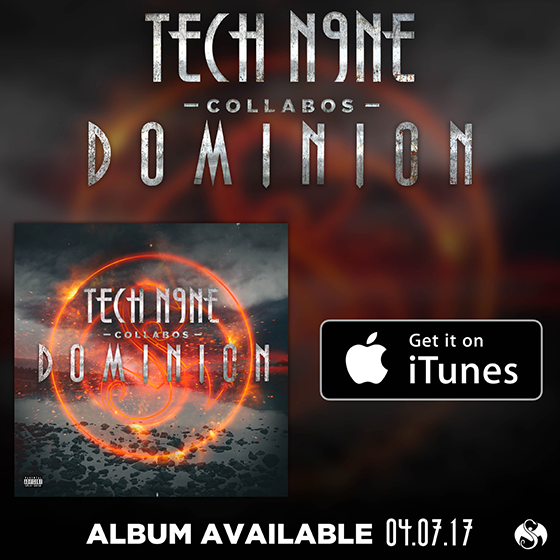