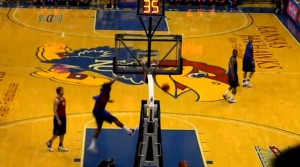 In an interview with Strange Music Blogs, Krizz Kaliko hinted that he might have the opportunity to perform his leaked song and University of Kansas basketball anthem “Game On” at KU’s annual “Late Night.” As it turns out this would have been impossible given that Krizz was on the road for the Independent Grind Tour during the season kickoff ceremony, but the athletic department did the next best thing and played the track during warmup dunks. We found a clip of the song being played while the team threw down dunks for the fans.

Click here or watch below to view the clip.