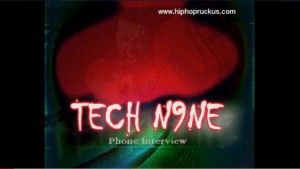 What makes Tech N9ne so special? The best answer to this question comes from Tech himself: “Tech N9ne is inside-out… out here for the world to see, no fabrications, no smoke and mirrors.” In this 2009 interview with Tommy Danger on hiphopruckus.com, Tech speaks candidly about the 1999 development of Strange Music and why it has had such success as an independent record label. “Extensive touring makes me tick. That’s why we’re the number one independent record label in the world… that’s why we’ve sold over a million sales collectively, because we tour extensively. The video also features Tech answering questions about who he’d like to work with in the future as well as offering advice for up-and-coming artists. It’s a must-listen for any fan of Tech, Strange Music or the Independent Grind Tour.

Check it out here or watch it below.