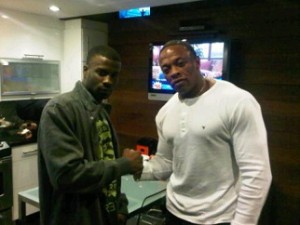 There is an unspoken tradition amongst hip hop veterans to give a helping hand to the younger generation of MCs. In the wrestling industry, its known as giving the “rub”. In hip hop, the passing of the torch or the “co-sign” has become the very thing that can make or break a career. While there are many veterans in the game who are willing to lend their support, others choose not to over personal differences. Ice Cube stirred up controversy when he publicly stated that he felt no obligation to help out other MCs from the West Coast, especially the “new” ones. Many people within the industry took this as a shot to the New West. Strange Music’s own Jay Rock, considered to be part of the New West, responded to the claims by Ice Cube. Still, even if Ice Cube no longer feels the need to co-sign any new artists from the West, there is still one hip hop legend who continues to build them up. Dr. Dre, one of the most prolific producers of our time, has been helping newcomers since the Early-90s. Almost everyone who has come out of the West in that time, owes some of their success to Dre. Now, two decades later, Dre has shown no signs of stopping. With the imminent release of his Detox record, Dre is reaching out to many new artists from the surrounding LA area. As this collaborative effort comes together, there is no doubt that Dre’s “magic touch” will be felt throughout the New West. 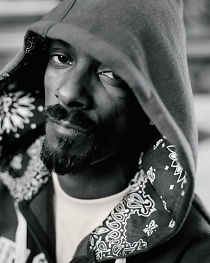 Bringing up new artists is nothing new to the former member of NWA. In 1991, when he split from the gangsta rap collective, he moved on to build his own label, Death Row Records. Armed with a new sound, known as G-Funk, Dre released his solo album The Chronic shortly after. Even with a hit solo album and multiple singles, the real star of The Chronic was none other than Snoop Dogg. Featured on most of The Chronic, Snoop was given a huge opportunity to make his mark as an unknown MC. With Dre’s blessing, Snoop was given the reigns to West Coast hip hop and soon became just as popular as his mentor. With his exposure on The Chronic, Snoop took full advantage and released his first solo album, Doggystyle. Recorded under the guidance of Dr. Dre, the album became a smash hit and soon went on to become four-times platinum. Dr. Dre’s risk taking on Snoop’s ability allowed him to create a new star that has outlasted most other West Coast MCs. It goes without saying that without Dr. Dre, there would be no Snoop Dogg. 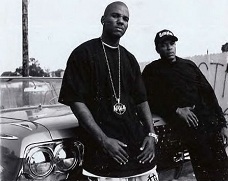 In more recent times, Dr. Dre found a new protégé in Compton’s own The Game. The brazen new MC was starting out in the mixtape circuit when Dre discovered him. Upon hearing his music, Dre immediately signed him to his Aftermath Entertainment label. Joining names like Eminem and 50 Cent, Game had just been placed amongst the elite ranks of hip hop. Dr. Dre felt Game had the talent to bring some much needed attention back to the West Coast. In an effort to raise his profile, he teamed Game up with 50 Cent and G-Unit Records. Game’s partnership with Dre motivated the young artist to carry on in the tradition of NWA and other West Coast legends. In 2005, The Game’s debut , The Documentary, was released to critical acclaim and was credited for reviving West Coast hip hop. Since it’s release, the album has gone double platinum and The Game still remains as one of the biggest names in West Coast music.

Riding the wave of attention given to the New West, Top Dawg Entertainment’s Jay Rock and Kendrick Lamar have managed to catch the attention of Dr. Dre. Currently signed to Strange Music, Jay Rock has been preparing to release his long awaited album, Follow Me Home. Meanwhile, his TDE label mate, Kendrick Lamar, has been burning up the freestyle and mixtape circuit nationwide. The two partners in rhyme have all of hip hop buzzing as they have both confirmed studio time with Dr. Dre during his Detox sessions. Kendrick Lamar would later confirm that he would make the final cut on Detox. Both Jay and Kendrick are stars, in their own respective rights, but there is no telling what something like this could do for them both. Dr. Dre’s status as a legend can help elevate them to the forefront of West Coast music. Detox has been in the works for a decade, and the industry has been clamoring for more music from Dr. Dre. The sales on this record alone are enough to give any new artist more exposure than they could ever hope for. Dr. Dre is doing for these artists what he once did for people like Snoop Dogg, Eminem, 50 Cent, and The Game. Jay Rock and Kendrick Lamar may very well be part of another classic hip hop, continuing the legacy of originators like NWA.

As the New West prepares to leave its mark on hip hop, they have a powerful ally in their corner. The Godfather of G-Funk, and the man behind the biggest names in hip hop, Dr. Dre, is leading the West Coast movement. The New West is now entering Detox, and hip hop may never see it coming.