More than a decade of independent success, and Strange Music still carries the same “F.T.I.” attitude that captured the respect of fans back in 2002.

In the midst of Tech N9ne’s emergence into the mainstream consciousness and the bubbling success of recently signed artists CES Cru and Rittz, Strange Music CEO Travis O’Guin hasn’t forgotten about the guerrilla tactics that got the Snake and Bat to where it is today, and he’s taking things a step further. 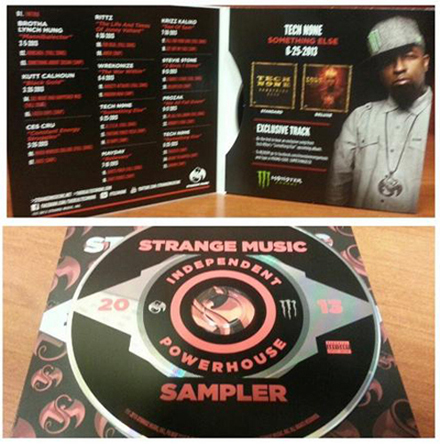 Not only did Travis commission an explosive free sampler containing tracks from every 2013 Strange Music release, he’s printed out 500,000 physical copies and is dispatching Street Teams across the country to hand them out to local business, record stores, basically any establishment that will accept them.

In a recent interview with HipHopDX, Travis addressed his defiant approach to marketing:

Since the arrival of the half a million free samplers, Strange Music street teamers have been hard at work distributing these 25-track physical freebies! Below we’ve included a short list of establishments around the country that currently have physical copies available.

We’ll update it as frequently as possible, and you guys can help us by sending an e-mail to fans@strangemusicinc.com and let us know if you find samplers somewhere in your city that isn’t already listed!

– Record Round Up / Albuquerque

– Beyond The Limit / Norridge

-Up in Smoke / Denver

Holler at us in the comments below!