In The Studio With Tech N9ne On ‘Tone’s World’ [Video] 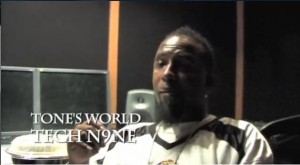 Hobo Tone just posted a video of the various cats involved with the Independent Grind Tour hanging out at Kansas City’s Chapman Studios two days before the launch of the Independent Grind Tour. In this episode of Tone’s World, we get to know DJ Whoo Kid (50 Cent’s DJ in town to record tracks for Bad Season, Tech N9ne’s first ever mixtape appearance), Dave Weiner (industry legend and President of Strange Music West), Glasses Malone (Cash Money records, on board for the Independent Grind Tour), Txx Will (just released a music video for “Last Call” featuring Tech, Krizz, and Scoob), DJ AK ( and last, but not least, Tech N9ne as he chills in the studio discussing plans for All 6’s and 7’s, claiming that it will be his “biggest album”.

Click here or watch below to view the episode