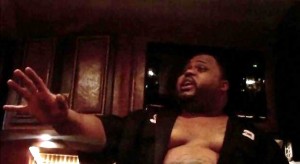 Here’s the rest of Big Scoob’s epic rant taken after the first clip was completed. Here we see Scoob still railing against the new tour manager, who by this time is referred to as “Meat Man.” Scoob expresses mock-fear of any reprecussions he has coming his way and says:

The exchange gets more and more hilarious as time goes on with Scoob cracking jokes in nonstop fashion. OG Muggs and Tech join in on the laughter, with Muggs observing:

“They put you on the bus with two of the worst niggas out here!”

Watch below and enjoy: