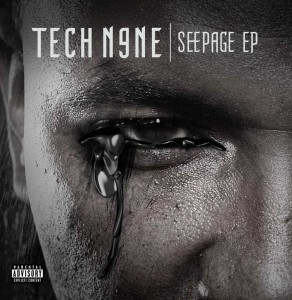 Tech N9ne’s return to the darkside, the Seepage EP, was released on iTunes today. So far the EP has climbed to number four on the iTunes list of top hip hop albums. Click here to purchase your copy of the Seepage EP.

So I was laying in my hotel room in Paris when Kaliko got the news that his best friend since childhood Chris Buckles just died awaiting a heart. While I was trying to act like I didn’t see Kali breaking down , my aunt Susie called crying saying mom was back in the ward. So then that’s when I went to my iPod to escape sadness. While going thru my playlist, I stumbled upon 5 paid for but unused beats from the K.O.D. collection. As much as I wanted to run from them, Seepage was born. To all the people that interview me, I would rather not talk about Seepage simply because I told fans on the Lost Scripts that those would be the last of K.O.D. I thought I could stay clear of K.O.D. but found out there’s no way out totally. So until I can figure out how to balance this thing I’d rather not speak on it due my lack of understanding. Hope you enjoy it though! It’s more anger than usual. Sorry n shit but thanx. TECH N9NE