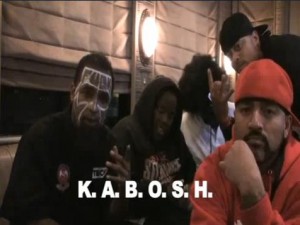 During his time in Fort Worth for the Independent Grind Tour, Tech gave a very special interview on the tour bus, where he spoke on his encounter on Lil Wayne and also announced that the much-anticipated KABOSH (Killing America’s Beliefs On Society’s Hoods) project is officially underway. Tech introduces the members of KABOSH: Krizz Kaliko and Tech N9ne as well as Dirty Wormz members Dok, Smackola, and DJ Crash. Dirty Wormz is a rock/rap band from Austin, Texas that have established themselves with crazy live performances along with their loud and abrasive mix of rock and hip hop. Not too long ago, Dirty Wormz posted remixes of Tech N9ne classics such as “Midwest Choppers” and “This Ring”. Check out their Facebook and MySpace pages for more info on Dirty Wormz.