Tech N9ne Used As A Punchline In Battle Rap [Video] 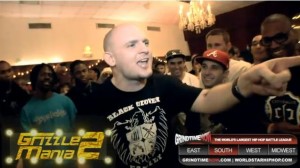 Check out this clip of a Grindtime Battle between Kansas City independent hip hop heavyweight Mac Lethal and San Jose native Dirtbag Dan. This was a highly anticipated battle, as Mac Lethal had taken time out of the battle circuit to focus on recording and touring. Audiences were anxious to see if Mac Lethal still had it, and as evidenced by this video, he does. Noteworthy is how Tech N9ne’s name is dropped and used as a punchline to end each rapper’s verses on the last round. Without spoiling it, we’ll just say that Tech is well represented as a king of both Kansas City and independent hip hop.