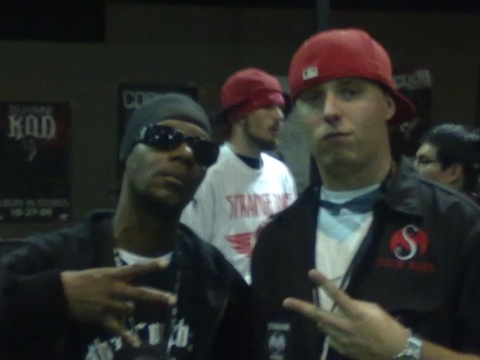 “I have been a long time fan of Brotha Lynch, ever since Season of Da Siccness dropped. So when I first heard Lynch was going to be on Everready with Tech I thought, Some of my favorite rappers are going to be on a single track together, this should be amazing. Then a couple years ago when I read Lynch was going to be signed to Strange I was ecstatic. Prior to the day of meeting Lynch I talked to him on Twitter, letting him know how much of a fan I was and that I’ve been following his career for quite some time now. He’s a really humble person, along with every one else on Strange, and I think that’s what I admire the most about them. No matter how much fame they achieve, they’ll always show appreciation towards their fans. Even if it’s as simple as taking a picture with them and signing a poster or CD. Before the meet and greet on May 26th, 2010, I was walking down the street and saw the tour bus. I stopped to take a picture with my phone, and the bus door opened. It was Cognito just sitting on the steps smoking a cigarette. He called me over, we shook hands and talked for a little bit. Then moments later Lynch walked out, and to be honest I was a little star struck. I introduced myself as my name on Twitter, Techn9cian4life, and he immediately recognized me and shook my hand. That’s a time I will never forget. Dinner and a Movie was long anticipated, and I’m very happy it finally got the chance to come out. I know Coathanga Strangla will be even better, and I can not wait to start promoting for it.” -Trevor Trizano, Boise Idaho Street Team

Do you have a picture of yourself with Lynch? Submit your photo along with a shout out or a story behind the photo to fans@strangemusicinc.com!