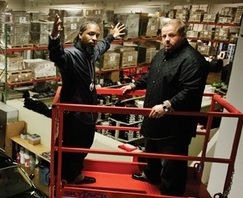 To celebrate those that led the United States on the road to independence, what better way than to interview the man that has led Tech N9ne on his own road to independence? Enter Strange Music President and CEO, Travis O’Guin, the man that took Tech away from bad contracts and legal bondage and onto the path of a hip hop empire built with independent dollars. The brilliant, outspoken, and yet humble businessman gave us the juice on a variety things that are a must-know for not only fans of Strange Music, but anyone who wants to build their own empire. Travis lets us know where Strange is compared to where it could be, reveals the ins and outs of Strange Music’s navigation through the murky waters of the music business, shares the attributes behind his personal success, and much more. This is one of the most candid and revealing interviews ever given from Strange Music, filled with much truthful and hilarious insight into the music business and Strange Music’s place in it. Listen below.