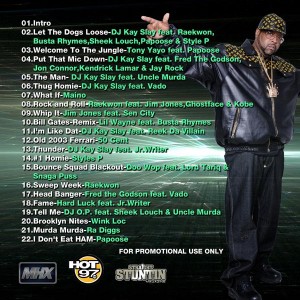 Look out for Jay Rock on yet another hot mixtape appearance as he grabs the mic on DJ Kay Slay’s Soul Controller mixtape on the track “Put The Mic Down”. The track also features TDE labelmate Kendrick Lamar as well as Fred The Godson and Jon Conner. The beat is reminiscent of a Just Blaze beat with soulful horns looped to a dramatic and bombastic effect. Jay Rock has the last verse, challenging all wack MCs and punctuating the end of the track with his vicious gutter flow. Click here to listen to the track.