Tech N9ne And Yelawolf In The Studio [Video] 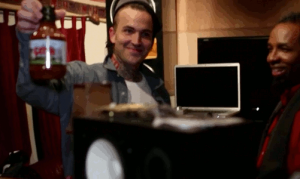 We’ve been talking about Tech N9ne and Yelawolf working in the studio together for some time now. Finally, we have some video footage to prove it. As you may already know, Tech is teaming up with some of the dopest tongues in the game – Yelawolf, Twista and Busta Rhymes – for “Worldwide Choppers.” The track is sure to be fire. Get caught up on what Tech was working on in Atlanta last week, and get a feel for what you can expect on All 6s and 7s. Click here to watch the Yelawolf and Tech N9ne video on XXLMag.com or check it out below. Keep a look out for a bottle of KC’s own Gates Bar-BQ sauce!