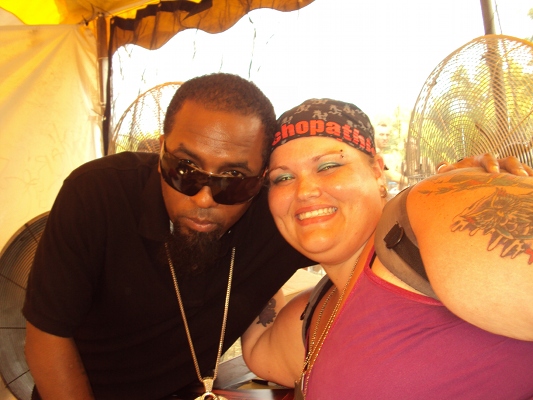 This pic was at the GOTJ 2010 and we waited in line for apx 7 hours. I was the first one in our group to go in and I was trying to hurry cuz I saw Tech(even tho I loved meeting Twiztid and Blaze). I needed to tell Tech how his KOD album really helped me through my mom’s death. Mostly “Low” and “Show Me A God.” I was shaking and butterflies were all up in my stomach and shit. I forgot to even get a pic with Kali. I felt bad. So, Tech and I took the pic and he wanted to see it so I showed it to him and in turn he said, “That pic would look much better if I wasn’t in it.” I was all smiles and said, “Whatever Tech you make that picture!” It was an amazing time and I will forever be a Tech N9ne fan. When I am old in the nursing home I will be bumpin Caribou Lou fo sho!!!! Much fuckin love tech!!! <3

Do you have a picture with Tech? Submit your photo along with a shout out or a story behind the photo to fans@strangemusicinc.com for a chance to be featured in Fan Pic of the Week.