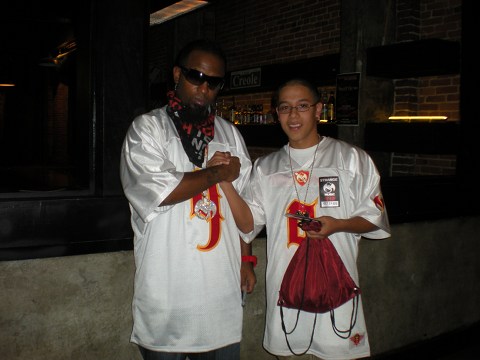 “My name is Emanuel Borja from Damascus, Maryland. The picture in this e-mail is from my second time meeting tech n9ne down in Baltimore. The first time i met him i was completely too timid to even say anything or even ask for a picture so i just asked if he would sign my shirt. The second time around i knew i had to make it count because this man’s music along with the rest of the strange team has gotten me out of personal dismay on various occasions. When I walked up to Tech the first thing he said was “i like your shirt man” ‘cuz i was wearin the same jersey as him which i felt was kinda cool that he even said anything. After that i asked if he would sign 3 cd’s Anghellic my first taste of his music, Everready my all time personal favorite by him, and the gates mixed plate a cd that i greatly appreciate. Although within that time he’d been dealt a lot of controversy over him workin with lil’ wayne i decided i’d say something to him. I told him that even tho personally i didn’t really like wayne’s music, i wanted to hear tech do 300% tech. I told him that where i’m from people had called me dumb for listening to his stuff, and that they called his music trash, and that all i wanted was to be proud of being able to say i’ve been a tech fan since tech was still small. I said i wanted him to do him regardless and that he’ll always have me as a fan. He responded with a smile and said he would do just that, and being able to say that i made my favorite artist genuinely smile is something i hold dear to myself.”

Submit your pics to fans@strangemusicinc.com for your chance to get in Fan Pic of the Week! Be sure to include a short description or story behind the photo!