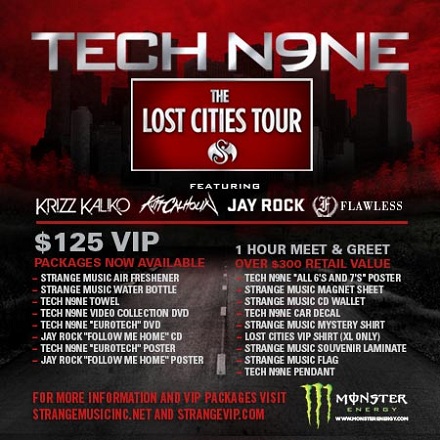 Tech N9ne lit up Santa Clara, CA on 10/23 when The Lost Cities Tour crashed through The Avalon for a night full of high energy performances from the biggest names in independent hip hop. Leading the night’s performances, Flawless opened up the show and gave the crowd a killer solo set. Jay Rock followed with his own set that featured his biggest hits and a bit of West Coast flavor for the California fans. Tech N9ne’s closing performance was the highlight of the night with joint performances from Krizz Kaliko and Kutt Calhoun. The Kansas City King left his mark in Santa Clara as The Lost Cities Tour continues to roll through California.

“sick as fuckkkkkkkkkkkk concert! ♥ even tho i was one of those girls that fell when you were going thru the croud ahahhaha”

“DAMN TECH THAT SHOW WAS FUCKEN BEAST SO WAS EVERYONE ELSE HOPE YOU COME BACK TO SANTA CLARA…TECH N9NE!!!”