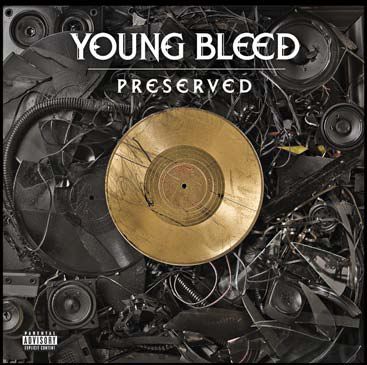 The legendary Baton Rouge MC broke down his album Preserved track by track to give a better perspective on his Strange Lane debut. Here is Young Bleed’s breakdown of the second half of the album.

That song in particular I’m just reinventing myself and reintroducing myself more or less. I’m saying “I’m the very originator of the ‘How Ya Do Dat’ but I’m going to do it one more time and let you know what it is, but this time I’m going to add a midwest twist to it and of course west coast twist to it.” I just wanted to do something different from what we did in the beginning.

It’s more or less being that kid like Henry Hill of Goodfellas growing up. I was parking Cadillacs real young, driving before I was able to drive, at ten years old. In one sense I was a privileged kid with respect for all the old men–my grandfather and others. I had a lot of old folk game when I was young. Lastly–running with all the D-Boys, killers, and everything that was in the community, city-to-city from state-to-state…it started small like a wildfire in my backyard. My cousin had a gang that he ran with in Baton Rouge. I grew up in a lot of ways with a lot of people living the gangsta way. That just kid of led out as far as my life and legacy. The song is just like saying “I’m a man amongst men” in a simpler term for those who aren’t just up on the gangsta side. On another hand I’m going back and giving something old and something new, a new way of doing “Gangsta Gangsta” by NWA. I just took the term and flipped it you know what I mean? It’s just saying that a “Gangsta’s gangsta” is the same as saying “he’s an all-around gangsta and an all-around hustler.”

This is a song that is saying “anything can happen.” Any given Sunday. It might not make no sense. It might not be positive all the time, it might not be negative, but it will go down. Expect the unexpected and keep your guards up.

“Money Over Everything” is a song saying, well naturally honor the God first, but next to that it’s life on the Earth. If heaven is not the Earth than the Earth is not the heavens. So in the same sense if you don’t work, you don’t eat. Regardless of what you want to do, or however you want to celebrate, if you don’t have money to take care of yourself or your situation, what’s the purpose? Money nowadays always banished the life blood of the country or the world for that matter. Love over all but at the end of the day, yeah, if it don’t make dollars it don’t make sense.” All the glitch shit and the hoes, that’s nothing.

Anything can happen. Really the whole zydeco thing, the feel of that music, is very Louisiana-birthed music–somewhere in between Louisiana and maybe Texas. Zydeco is a Cajun kind of music. It’s kind of hard to explain. It has it’s more category more or less. “Call The Police” captures that sound to me. The hook means “you can call the police and do what you wanna do, but we’re going to have a good time or tear this motherfucker down, one of the two.”

I made this song in particular from coming back to Baton Rouge a few years ago and finally having the chance to see the movie City Of God. It’s hard to sum it all up. Baton Rouge right now, you’ve got four or five murders a day. They’re senseless murders–kids! You look at the movie City Of God, a lot of kids are robbing and killing. One kid in particular, Li’l Zé, he’s a young killer and he grows up a killer like that. That’s my family and my backyard: this shit is a killing field. Fuck the bragging rights and all that, it’s sick and pathetic. A lot of the shit I come home to relates to that. A lot of people, if you’re not paying thirteen to seventeen hundred a month, you’re in the heart of the ghetto. That shit is overcrowded due to Katrina and everything else. You’ve got Baton Rouge people killing New Orleans people and New Orleans people killing Baton Rouge people. I’ve got a list of family members that just over the years has gotten into some shit I can’t even get into. The slum, the Rio De Janeiro for those who don’t know the movie City of God, that’s right in my neighborhood. Police get killed right in the alleyway. I went right back to the heart of my hood and a few other hoods. I couldn’t leave wife and kids in the crib with motherfuckers shooting right by the window and shit. I had to move around and sleep back with a gun. I always give my glory to God and see how he looks out for me because I’ve been to the heart of hell. Without going into personal situations with family members and different things like that, that’s the best I can tell you.

“Papa Papa” was one of those songs that says amidst all the bullshit and everything, I aint about that bullshit. If it don’t make dollars it don’t make sense.

It’s me taking my hat off and my heart going out in respect all the way around, like to God. Amidst all the bullshit, all the murders, as dark as it gets and as bright as it gets, I still want to thank God at the end of the day and the people that have helped me get to where I’m going. That’s a signed, sealed, and delivered thank you note at the end of the record from yours truly.