Of all the Strange Music tattoos we’ve come across (and believe it, we’ve seen a ton), one that’s always stood out the most is one that you might be very familiar with: Jack Young’s “Abu Dhabi” and “6688846993” tattoos on the back of his calves.

We tracked down the 20 year old Kansas Citian and got his story.

When and how did you first hear Tech and were introduced to his music?

The first time I heard Tech’s music was “Midwest Choppers” on Misery Loves Kompany. I believe a friend of mine made a mix cd of some songs and “Midwest Choppers” was on there and it was I’d say, 2007, so that was about six years ago.

When you first heard “Midwest Choppers” what did you think?

I was thinking that this dude’s music isn’t like anybody else’s. At the time I didn’t really have knowledge of what music was, but I knew that his was something else.

What is it about his music that makes you such a big fan?

I have to say, hardcore presence. That the last decade, there’s been a number of CDs, and no matter what the people say, what matters is that it’s his music. He’s putting it out because he wants to put the music out and that’s something I look up to, because if you worry about what other people are thinking too much then your music might not be what you want it to be. I definitely admire Strange Music and Tech N9ne because he is putting out music anyways and it don’t even matter.

What are some favorite songs you have from Tech or Strange?

You have Nnutthowze and Abu Dhabi tattooed on your calves, what inspired you to do that?

What inspired me is I could say that I could listen to Strange Music all day. I wanted to get my first tattoo and I thought I might as well let people know so I don’t have to say anything, they can just see for themselves that I’m a big Strange Music fan. 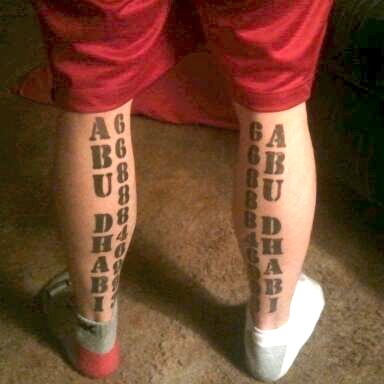 What is it about these tattoos that’s so important to you that you’ll wear them proudly for the rest of your life?

I definitely agree with adding numbers up equaling 67, 6’s and 7’s, and if you’re both then you might be someone that’s a little crazy. I also am a big fan of the number 7. I just wanted to show my dedication and my appreciation. The way that I got it done was on both calves so it’s symmetrical.

What is it about Strange Music that has you so dedicated?

Well Strange Music got me through a lot of bullshit in my life. I still listen to them everyday. It’s just a regular thing for me listening to a Strange Music CD. For the S.O.S. Sale I had to get all the rest of the CDs. Since I got out of high school it’s been a bunch of regular shit that everyone has to go through, and it’s helped me realize that there’s a lot more to life than just all the bullshit. It means a lot to me because I always say “I’ve used it,” but I’ve definitely listened to Strange Music and looked for the messages in the music and trying to learn from them and am trying to tell other people what Strange Music has been telling me.

What’s some of the bullshit that Strange Music has helped you get through?

I got six speeding tickets and then that resulted in me losing my license so for all of 2012. Basically I was on foot. Anywhere that I needed to be I had to walk and I always had my iPod with me or my headphones in whenever I’m walking.

This one time when CES Cru was shooting at the Nelson Art Museum I was up there and as I was walking back home from Missouri and I was sitting on a step and the shuffle started playing “The Rain”. The song started playing and a second later a drop of rain fell down on my arm and then I started getting spooked out because that’s some strange shit. I started walking towards the bus stop down in the Plaza and on my iPod I didn’t know about it but “Need More Angels” started to play and I hadn’t heard that song. I didn’t even know that song existed and I started listening to it and it really opened my eyes. That’s just some of the stuff in 2012.

If you could say anything to Tech N9NE what would you say?

I’d say thank you for putting out all this music in the last decade. Straight up thank you. 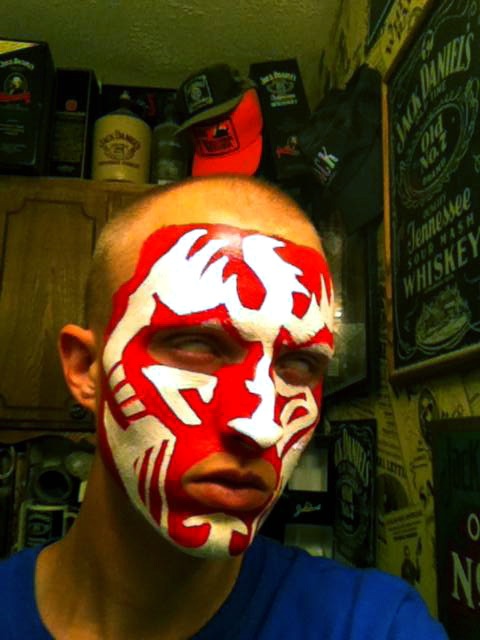 SEND YOUR TATTOO PICS AND STORIES TO FANS@STRANGEMUSICINC.COM