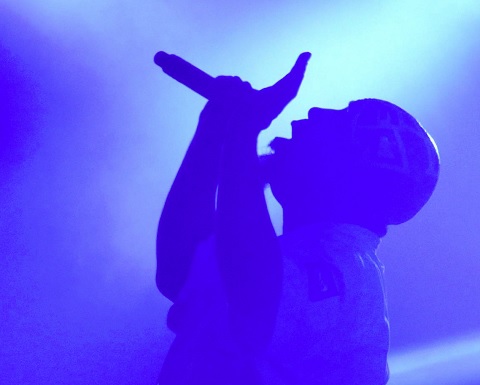 It’s an issue that’s been around for decades and while it’s normally associated with rock n’ roll, rappers have had to to deal with their share of overzealous females on stage.

As most fans have no doubt read by now, Danny Brown made headlines recently after a performance in Minneapolis saw the Detroit emcee get more than he bargained for by an eager girl at crotch-level. If that isn’t enough of a hint, let’s be real – Danny Brown supposedly got head on stage and a photo of it leaked online.

While everyone in the blogosphere has had their say in the matter – we recommend Kitty Pryde’s awesome piece, we decided to take the subject straight to someone who knows a thing or two about crazed females : Tech N9ne.

While out on the Independent Powerhouse Tour 2013, Tech weighed in with his thoughts…

“I got a picture of it yesterday. When you’re performing in places and people are right by your crotch, they try to go in my pants all the time. You look down to see if it’s a guy – it’s not, and it’s a girl so then you try to gently slap the hand. They go in and try to grab my dick all the time – on this tour, they do. You just gotta know how to handle it. Obviously my nigga Danny, probably don’t have a woman at home, so he can let it happen a little bit. Not me (laughs).

We wear belts, you know. We wear uniforms so the only way to get in our pants is to go through those long-ass slits on our army pants, but they get in there when we do ‘Worldwide Choppers’ down there with the crowd. The first thing they do is try to grab your dick. It’s normal. You just have to know how to deal with it. When someone’s trying to give you a fucking stroke job while you’re trying to concentrate on music, you gotta pull back. You can pull back. If you’re in the moment and you’re feelin’ good, maybe you’ll grab her hand, but I ain’t never did that. They waitin’ to take me to jail for indecent exposure and that ain’t about to happen.

It is what it is. It could easily happen, but we wear uniforms. I don’t even know the full story, but from the picture I got, it looked like he had her head. So…they don’t get that far with me.”

Shout it out in the comments below!