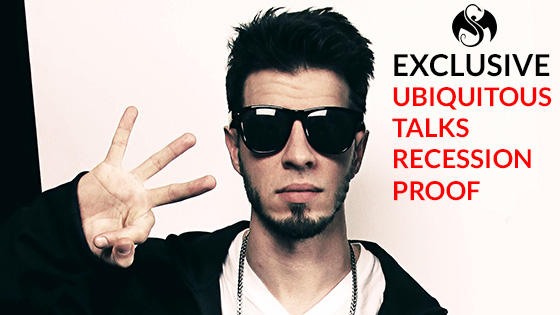 With their second EP only a week away, CES Cru is ready to break the market with Recession Proof.

Do you want to do a little prayer before we go?

You go ahead. Go ahead and drop it son.

Please Lord, guide us towards an interview of truth and substance that will prove to be rewarding for the readers. Let our words be honest, respectful and nourishing…for each other and the readers. Thank you Lord. Amen.

Amen. I forgot to…

Why did you guys call the album Recession Proof?

It was kind of Godemis’s idea. He kind of wanted to do it, but it was also an old idea that we resurrected from Sike Style’s style pile. He was doing some Recession Proof art several years back so we just kind of smushed it all together, the Recession Proof thing.

How is it reflective of where you guys are at in your career? What’s the recession and how are you invulnerable to it?

Basically the literal translation – and this reflects in the lyrics a little bit – the music industry is experiencing a recession and it has been ever since I’ve taken a professional part in it. The irony is, at the same time that the music industry is shrinking, it simultaneously happens to be our greatest upswing or growth. So there it is. I just think that that’s odd. Our line is going up on the graph chart but the overall line is going down.

What are the biggest lessons you’ve learned about the music industry since signing a record deal?

That’s a big, broad question. I feel like I could answer that question for a really long time. I think the best lesson is that you have to be resourceful and proactive. Just ready to work on your own. I knew that before I signed though, but it continues to apply.

That seems to be a principle that got you guys signed in the first place.

Yeah, and post-signing it’s still a survival principle. It’s necessary and it doesn’t go away.

Like you mentioned before, the landscape of the music business is changing and it’s becoming harder and harder for artists to make ends meet. What gives you hope that this is still worth investing your time?

I guess I’m not looking for a beacon of hope. I just kind of do it anyway. I’ve been in it for so long without any sort of financial encouragement. That’s not the driving hope. I have to create regardless. I’m going to be creating regardless. I’m just enjoying that my creations are able to be broadcast on a larger level. It’s a nice benefit.

You have beats from a producer that’s new to you guys on this album, Kato. How did that relationship come about?

I want to say that he reached out to me and I just quickly responded. We kind of went back and forth and just formed a direct connection, which was pretty refreshing to not have to go through subchannels or whatever. That was it. It was easy. It was pretty much like “Yo, I got tracks.” I was like “Sweet, send me tracks. Hey I like these ones. Cool, let’s do this thing.” Boom. Paperwork. Bing, bang, boom. Tracks on the record. Real easy to work with.

That’s awesome. Do you foresee working with him again in the future?

Yeah, that’s a possibility. I was happy with the way this went.

You guys also got another beat from Leonard Dstroy, or rather the new production duo he’s a part of, The Xtraordinaires, correct?

Yes. Dominique Sanders is the other half of that.

How important though is Leonard Dstroy to your guys’s sound? He’s had production on 4 of your last 5 projects, including this one.

He exclusively produced The Playground. He had four contributions to the Constant Energy Struggles record and two contributions on Ego Stripper. Then one, with the help of Dominique, on Recession Proof. He gave me one for my mixtape too. There’s little things here and there. That’s so far his contribution. I know we’re going to do more work in the future. I just did one with Lenny and Dominique actually. Another Xtraordinaires collab called “Average Joe”. It’s behind the scenes right now. It’s not out. It’s pretty cool. So yeah, I like working with them. They have a really organic sound to their beats.

Seven came through with half the production. What’s it like working with him these past few years? It seems like he’s always able to come through for you guys.

Seven’s always fun to work with. He brings a lot to the table. He’s the type of guy that can work forwards or backwards, meaning that he can come to me with a beat from thin air, from scratch, like “Yo, I made this, what do you think?” Or I can come to him with a rhyme like “Yo, I wrote this shit. We need something that sounds like this,” and he’ll crack that shit out. He’s fast…as fuck…in the studio, and he turns out really great stuff all the time. I’m really happy with everything he did on Recession Proof. He did “Off The Hook” which is really cool. He did “Ricochet” and “The Mo”. I think those are all great songs.

Speaking of “Off The Hook” and Joey Cool, he’s the only featured artist on this album. What can you tell us about him? 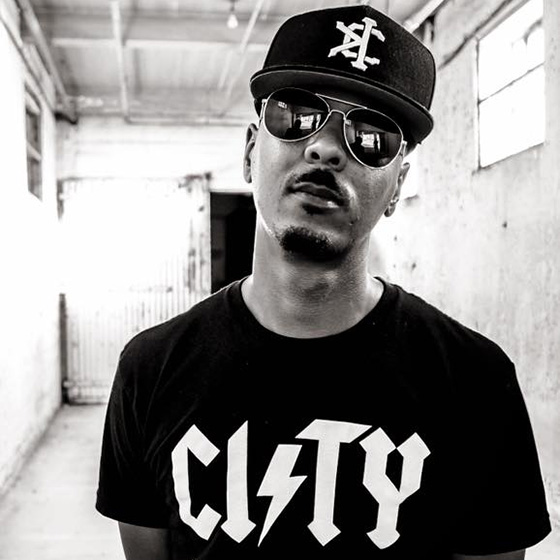 Hopefully, for everybody that came out to The Recession Proof Tour, they caught Joey Cool on stage with us and him during his set before we went on. That was a big chance to meet him. He’s from Kansas City as well. He’s kind of from down the block. We all live close to each other and he’s in a group called Three The Hard Way with JL and Dutch Newman. That’s the first place I’ve seen him, first place I’ve heard of him was Three The Hard Way. The first of the three I knew was Dutch. I’ve known Dutch for a really long time. I met JL second and Joey third.

What can you say about him as an emcee and his appearance on this record?

He’s a great rapper. He’s a really skillful rapper and does a dope show. He did great on our record. He killed his verse on “Off The Hook”. We gave him the money slot too – the pressure slot, if you will. He stood up to that pressure and delivered. It was dope. We did that song all tour long.

You and Godemis have a verse on the title track where you guys bounce back and forth? What is that process like? Does it take awhile? Do you guys write bit by bit?

It’s a back and forth writing process. It’s just sort of a brainstorm out loud and we go back and forth and shoot ideas. “Okay I’m going to do this. You do that. You do this. What if we did this? Okay let’s try that.” Boom, boom, boom. Scribe that shit out. And that process doesn’t take that long. I think that that particular verse might have taken us an hour or two, or something like that. I think the reason it only takes an hour or two is because we’ve been working together for a long time. It’s a little easier now because we have a process already.

Do you guys have earlier examples of this kind of work together? Did it take a little longer then because you guys were just starting out?

Nah. It has never really taken that long. The first time that we did that was on “Body Parts” way back on our Capture Enemy Soldiers record and it had a similar writing structure, where we were shooting rhymes back and forth or whatever. But yeah it doesnt’ take that long. He writes, I write, he writes, I write.

How long have you guys been a duo?

We’ve been on the duo formula since basically 2005. So it’s been ten years. Even before that, when there was more people in the group, we had a strong dynamic within that group.

Have you guys built a telepathy over the years from working together so long?

Telepathy? “Shorthand,” I would call it. We are able to sort of communicate with looks, which is sometimes the only way you can do stuff like that in the middle of a show or rapping. I can’t say stuff, so you communicate with a look. Maybe that’s telepathy. “Yes,” I guess, is the answer? Yes, we’re telepaths.

Have you ever woken up in the middle of the night like “Oh my God, something happened to Godemis!” because you felt it?

Do you have any favorite tracks from the record?

It’s a good record. I’m not really good with favorites. I like “The MO”, I guess.

How do you think fans will receive the EP?

What can fans expect from CES Cru after this? What do you guys have in store?

Well we’re working the Recession Proof record and that’s going to be our focus for probably until the end of the year. There’s some videos coming out to support the record. A video just came out called “Letterman” yesterday I believe, yesterday afternoon, so that’s floating around out there right now.

There’s a couple more coming. We’ll be popping up here and there to support the record and talk about it. But after that it’s moving into Strangeulation II which is probably going to keep us busy as well. I expect to be working that record through the end of the year simultaneously. So, I got plenty of work to do between those two. Then into 2016 I plan to keep a full year touring, a new LP from CES, and plenty of other stuff.

Any title ideas floating around for the new LP?

Oh sure, but nothing I can talk to you about really.

That’s fine, I was just asking if they were even floating around at this point.

Oh they’re always floating around. We already have titles, many titles scripted out, for our project. It’s really just a matter of this one or that one, but I can’t reveal those titles to you.

That’s fine, you don’t have to. Anything you want to say before we get out of here on behalf of yourself or CES Cru?

No. No. Is there anything that you wanted to ask me before we get out of here on behalf of whoever you represent?

Who’s your favorite member in Outkast?

I don’t know. I mean they’re both good. It’s too hard to measure. They’re better together, I’ll tell you that.

Their solo efforts are good, but I think that they’re great together.

I think that’s about it.

Do you think you and Godemis will be buried next to each other?

I would doubt if Godemis was going to be buried. 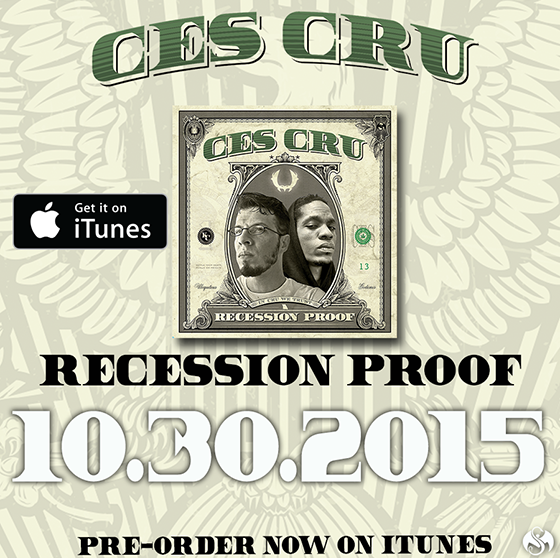