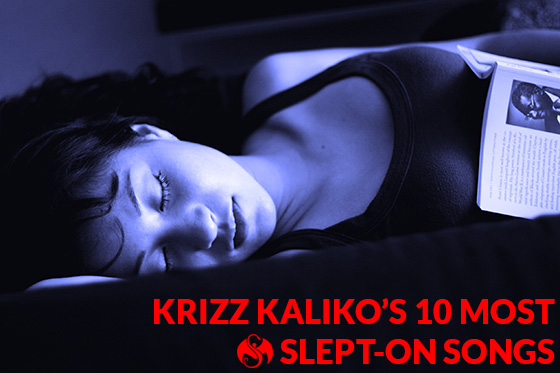 Krizz Kaliko is one of the most slept-on talents in all of music, so how do you tally his most underrated songs?

It’s a difficult task, but we managed to put together a list of songs that we feel don’t get mentioned enough when it comes to Strange Music’s resident musical genius. Of course this list could go on and on, but we kept it to ten.

If you haven’t heard the songs below, do yourself a favor and treat yourself. In celebration of GO, we present this list for those who need to get caught up on music’s best kept secret.

This sultry jam produced by Seven is a great multi-purpose song: great for drinking and great for sexing. Krizz Kaliko’s infectious hook and the female “Hell yeah!” counterpoint make for a great soundtrack for clinking glasses. The song also takes a dramatic turn at the very end, showcasing Krizz’s versatility and limitless musical imagination.

Krizz has always had a penchant for the melodramatic when it comes to expressing the neuroses inside of his mind, body and spirit. Songs like “Created A Monster” and “Hello Walls” are celebrated exercises in turning doubts and fears into incredibly moving songs of redemption. “Proof of God”, the spiritual successor to those songs, is perhaps his most poignant out of all three. Coming to grips with the fact that his faith doesn’t have a material counterpart, Krizz pours his heart out on the track with a chorus that soars to the heavens.

Sometimes it’s the nice guys you really gotta worry about, as Krizz lets you know on “Wannabe”. Although Krizz is a man of God, he’s just like the rest of us, and if you push him too far things could get ugly. Seven’s production is a great combination of an ominous piano riff and a thumping rhythm section to give Krizz the perfect backdrop for his reluctant menace. Twiztid finishes the track off with raps that showcase them at the best of their abilities.

The relationship between future potential and the frustration entailed in waiting for that potential to be fully realized is explored in this haunting track that caps off Shock Treatment. Krizz Kaliko is as talented as an artist as there is in the world, so how come he’s still anonymous to so many? This is the question that Krizz has to wrestle with, when the reality of the situation doesn’t match what it should be (side note: from listening to GO, it doesn’t look like Krizz is going to be on stand by for much longer).

The conflict between temptation and righteousness is one that permeates the body of work at Strange Music. Krizz Kaliko and Tech N9ne are one of the foremost witnesses to what it’s like to be a working, successful musician and a man of God and family at the same time, and the struggles that come with it. In “Down” they both revel in the “party and bullshit” lifestyle while renouncing it at the same time. Tech delivers one of his most ferocious verses, a dizzying barrage of bars about his frenzy for females in which he promises he’d even bone the devil’s chick if it came down to it.

This ode to the sun’s absence is one of the most soothing tracks that Krizz has ever put out. A pulsating lullaby, this song is perfect for driving under electric hues and amidst the cityscapes. J White’s production and Krizz’s gentle crooning make this a slept-on gem that should ready to play be in everybody’s whip.

Krizz’s touches on one of the hardest parts of being a working musician with the song “Rewind”. Over a way-ahead-of-its-time production by Seven, Krizz laments the time he has to spend away from the people he loves because of the time and sacrifice it takes to chase his dream. Tech N9ne drops a scathing verse that goes with the theme of rewinding time, telling her ex that the man she chose over him is probably the cause for much regret, now that Tech N9ne blew up and is no longer the struggle story that he was when they met.

Plights of a bipolar man include the multitude of pills that are either coming or going during the ongoing struggle to maintain emotional and mental balance. Over Seven’s rock and roll production, Krizz describes the roller coaster that is life in his head. This rollicking song includes one of Krizz’s most defining lines: “My mental state is hanging in the balance, I’m crazy that’s the reason I got talent!”

One of Krizz’s most defining tracks: “Bipolar” is a first-person account of what it’s like to carry one of the most misdiagnosed mental diseases, bipolar disorder. One of the most harrowing parts of having the disease is that, as a child, you don’t understand what you have and neither does anybody else, until one day you “wake up bipolar,” as Krizz so aptly puts it. The juxtaposition between Youngfyre’s semi-upbeat piano and Krizz’s harrowing account makes this one of Krizz’s most effective tracks.

Issues of trust as it relates to time and geographical distance are thoroughly explored in “Can’t Be The Only One”. Seven drops one of the most original productions, an abstraction of motown strings mixed with an cyclical loop that fuels the paranoia of the main protagonists in the song. Krizz Kaliko and Tech N9ne express their incredulity towards the females who claim to be faithful even though the two artists are out of town for most of the year, resulting in an overlooked gem on an album full of classic songs. 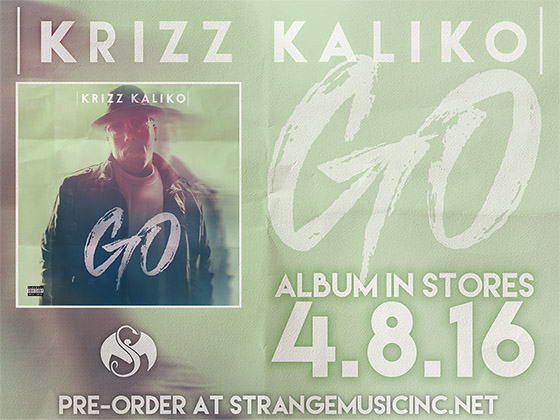