“Our Friendship Strengthens Those Creative Juices”: MURS & Krizz Kaliko Talk ‘Another Round’ Collaboration

Strange Music truly is a family. Ask Rittz about Ces. Listen to Godi on “Highlander.” What makes the Snake & Bat work is the genuine love, respect, and admiration the artists have for one another. Combine that with Seven’s ability to make beats that are begging to be rapped on, and it’s why, even on non-collabos albums, you are quick to see Strange Music artists all over each others projects. MURS’ new album Captain California is different though.

The exception proves the rule, I guess.

As much as we’d all love to see two of the best independent rappers ever hop on a beat together or a “Metal & Flesh” part 2, think about it. Would an album all about MURS, one that’s dedicated to California, make sense chock-full of features from the best KC has to offer? Nope. It’s why, the only Strange Music appearance comes courtesy of one Krizz Kaliko on “Another Round.” There may only be one Strange feature, but MURS and Krizz make it count.

As MURS reflects on the highest highs and the lowest lows of a relationship, Krizz, glistening yet punching hook, evokes so much emotion, making “Another Round” a definite album stand-out. To get an idea of how the one Strange Music feature came to be–and why it was right for that song– we sat down Captain California himself to discuss his approach and the creation of “Another Round.” But with the hook playing such a pivotal role,  it didn’t seem right to leave out Krizz, so we asked him a few questions about the effort and combined both of their answers to get the full picture of “Another Round.”

MURS on only having one Strange feature:

MURS : I don’t like to do things with artists on Strange unless it works. I still haven’t had Tech on any of my albums.I may leave this label someday and never have a song with Tech N9ne and that’s fine with me. If it’s not perfect I’m not gonna force it. When me and Tech happen it will be organically. It won’t be, “Oh I’m on Strange. Everyone gets their obligatory Tech N9ne feature.” I know he’s there for me, I know he’ll do it, but I’m not gonna ask until there’s a good reason.

Me and Krizz, we’ve known each other for years. We’ve been touring together since the Sickology Tour. Joking, hanging out with each other’s families, but it’s not real until now as far as musically. It came together perfectly. I’m glad I waited and I didn’t sit down and force a song with Krizz Kaliko.

Krizz on his relationship with MURS

Krizz:  With MURS, I tease him a lot. He’s like my little brother, so it’s a easy for us to work. I call him Nicolas, because that’s his name, but I also call him Rainbow Brown. It’s an inside joke we have because he wore these tights. Most guys wear shorts with tights but he just had the tights. They were Adventure Time tights and they had a bunch of colors on them. When I was a kid there was this toy Rainbow Bright, since he’s black, I call him Rainbow Brown.

I know about MURS’ life and his relationship woes, so it’s easy for us to gel on songs ,especially one like “Another Round” that’s about relationships. Our friendship strengthens those creative juices. It’s easy to have that chemistry when you know more about the person.

My bro @murs316 or as a call him Murses (Moses). Dope new one called GBKW GOD Bless Kanye West. Link in my bio. Omg!!!

MURS on getting Krizz involved:

MURS: Samuel Watson was on the song because I had a hook on there and I didn’t like it.  I didn’t like the song at all–“here I go whining about my girl problems again.” I don’t want to put that shit out. I don’t enjoy making those songs. It hurts, but I like to get it off my chest. It didn’t even have to go on the album.

Seven sent this beat and I thought “Oh I’m probably just wasting a good beat for Dominion,” but the way Ben mixed it!  When I heard Ben’s mix. Holy shit! This may be an element of Strange not everyone knows about but the way Ben mixes things. Oh my. I took a song off the album to put that one on.

As I listened to it more, I thought it was too big and too dope. I was like, “can we get someone to sing? Mackenzie or Krizz? Or Stevie? someone over there has to write to  it.”

So Krizz called me and we joked around, he called me “Rainbow Brown,” that’s what he likes to call me. Anyway, I wasn’t sure if it was gonna make it.  I didn’t want to put it on the album as it was, I needed Krizz on it. If he didn’t do it I was gonna nix the song and put the other one back on.  When he sent me it back I was so happy! It was amazing! Krizz knocked it out of the park!

Krizz on working getting involved & hearing the final version:

Krizz: When he called me I was writing collabos stuff that’s in that realm, stuff that has that pop feel to it. Once I get the juices flowing I can do whatever, so I was in good creative space to write stuff for MURS. It had that same energy, the same color as the stuff I was writing.

He said, “Man I need to get this song done.” I said, “Send it to me. What you need me to do?” He said he had a hook and verses, so I said “You got two verses and three hooks, so what am I supposed to do?” I didn’t know where I would fit in but he let me do my thing. I cut his hook in half and did a hook with this particular voice I like to do when I do pop music.

I heard it when we did it in the studio but I just heard the mastered version. That always brings it all to life, hearing it all together not fragmented and Ben is a genius; he brings it to life. It was already good but now I feel like I can enjoy it how its supposed to be enjoyed. I didn’t know it almost didn’t make the album. I’m glad I made the cut and made him keep it on the album.

Rarely in interviews do you get the chance to hear the two sides of the story, which is what makes this one so interesting; it gives you the full picture behind what goes into even just laying down a hook. It’s crazy to think that the release of “Another Round” hinged on Krizz’ hook, and he didn’t know. It’s fascinating to hear about how their relationship helped Krizz form fit his hook; that’s something you wouldn’t have known just talking to MURS.

We also wouldn’t have had any idea how synchronized they were. Sure MURS talks about their relationship, but seeing them both, completely independent of one another, mention the “Rainbow Brown” nickname and stress how vital Ben, the engineer, was to the process, shows they really are on the same page. It’s what makes the interview great but more importantly what makes “Another Round” such a home run. 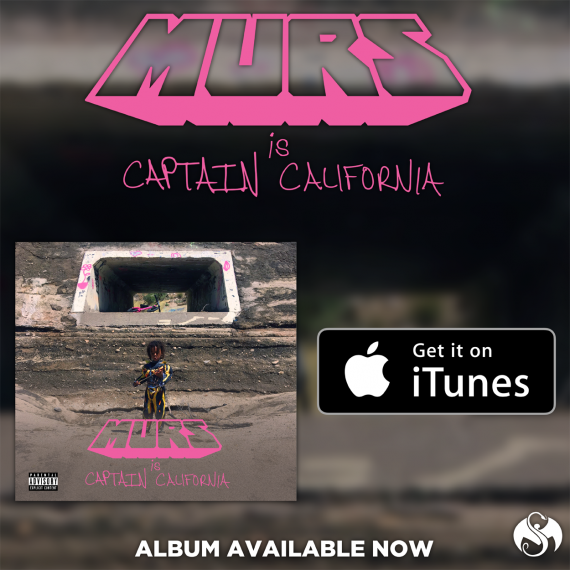