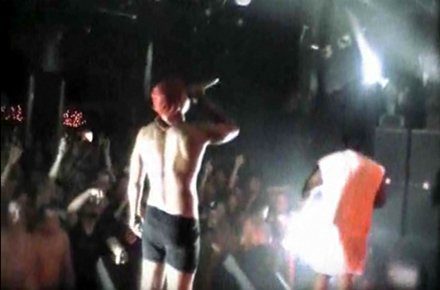 Have you ever been in a packed venue with a faulty air conditioning? All the humidity and heat from the crowd rises up and onto the stage and can make performing a hyphy set nearly unbearable. In situations like this, sometimes you just have to adapt. During a performance on the Strange Days Tour, Kutt Calhoun and Krizz Kaliko did just that, albeit in a very unusual fashion. During the set, Kutt and Krizz decided it was an appropriate time to strip down to their underwear and perform for the heated crowd. The clip shows the two hyping up the fans with a game of “Party over here, aint shit over there!” before Tech and the entire tour roster launches into “I’m A Playa”.

Strange Music: anything can happen!