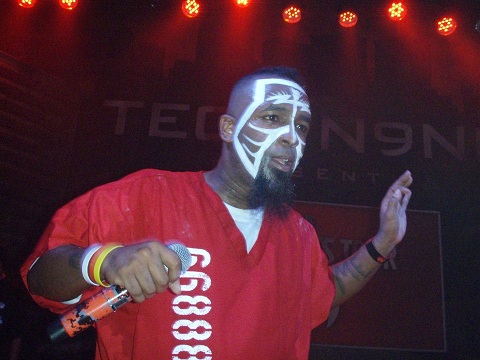 As we recently reported, Tech N9ne’s stage show during The Lost Cities Tour went through a major overhaul only a week into the tour. In an attempt to please his fans, Tech even took to Twitter to explain just why he chose to change his show and why it is that he started off by performing the All 6’s And 7’s Tour show. While taking a break from the tour in San Diego, we caught up with Tech N9ne and asked him to elaborate on the new stage show.

Why did you decide to change your show a week into the tour?

The thing was, like I said on Twitter, I was working at home a lot on the Welcome to Strangeland album. It was an intricate album, I worked up to the wire on it. The means it only left us with two days to rehearse, and the show was too intricate to have two rehearsals and then go out and do it. So I said, “We weren’t ready.” So I started doing the All 6’s And 7’s line up, the same show. We were practicing like every day, but I knew it would take like a week before we got it. We wanted to do it in Oklahoma, but we weren’t ready. When we got to Austin, I still didn’t think we were ready, but all those cities we had before Austin had never seen the show, so it was fair game. Some of the people that were coming, came to the last shows, so they were making comments, “It’s the same line up.” I just wanted to explain to the fans that I was just trying to get it perfect before it hit anybody, so we did it in Austin for the first time and I was just surprised that we were so good at it, at that first time, and it was in front of my band, Dirty Wormz, so I was nervous. The mutherfuckers are on point, I didn’t want to be off point in front of the band, you know. It went good and we’ve been doing it ever since. Before this tour went out, I did the new show, I put the new show together, but it was so super intricate that we didn’t have time to practice it, so once we got practiced up, I did it. That’s why it changed.

Is it perfected by now?

Totally. I’m still getting better with it. All the Choppers together are almost impossible to do, but I’m doing it better and better every night. By the end of this week, I’m sure I’ll have it down pat perfectly. ”Beautiful Music” is getting better and better because it’s a intricate song to do [spits intro to “Beautiful Music”] just that first line is impossible. It’s getting better and better every night, I’m having fun doing it. The Choppers are kind of scary because you have to say everything perfect. The first one, I’ve been doing for a while so that’s cool, but when I come to the first four bars of the second one [spits “Midwest Choppers 2”] you gotta say all that right man. That first whole line is not a breath, it just don’t stop, it’s almost impossible. We challenge ourselves and it’s been going pretty damn good.

How difficult was it to change the show when you were already a week into the tour?

It’s not. It wasn’t difficult. Travis was calling me like, “Tech man, we gotta get that new show on them”, and I’m like, “Travis, we ain’t ready yet. The guys don’t really know all the new music and I don’t know none of there stuff.” I been really working, right after All 6’s And 7’s I started right in on Welcome To Strangeland. I haven’t been studying Red-Headed Stepchild like I should because I been working, or all the stuff Krizz got. I didn’t mind switching it up because it was a relief, I wanted to appease the fans, all of them. I knew that this new show would. I know that me doing All 6’s And 7’s show, even though they said they would still come, they already paid to see this, it ain’t fair to them so I couldn’t wait to change it.

Is there a song that you get tired of performing?

Out of the new songs you’ve been performing, which is your favorite?

“Beautiful Music” and “He’s A Mental Giant”, oh my goodness. “He’s A Mental Giant” and “Beautiful Music” are by far my favorites on this one. What I open with, the two that I open with that are brand new off of All 6’s And 7’s, they go really hard. I’m enjoying them a lot more as I do them. If you know what they are, you know what I come out to, but for those who don’t know, I don’t want to give it away. I’m sure all you gotta do is go on you tube or something like that and get the line up, you know what I mean.