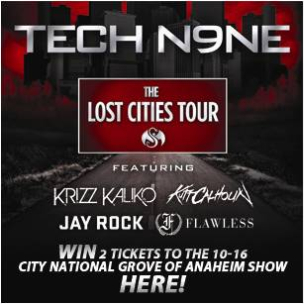 Enter for a chance to win a pair of tickets to see Tech N9ne & friends perform live!

TECH N9NE has earned the title of hardest working Hip Hop artist. He recently wrapped his monumental “All 6’s And 7’s” tour, put the finishing touches on his latest Collabos album, Welcome To Strangeland, and is getting ready to hit the road to wrap up the year. His hustle and flow have paid off: his last 4 albums have debuted #1 on the Billboard Independent Charts, he has over 1.1 million Facebook fans, he’s #1 on the list of MySpace Top 10 Indie Artists, and XXL Magazine recently featured TECH N9NE and Strange Music in a six-page spread.

To Enter: Tweet @HipHopDX & @TechN9ne with the answer to the trivia question, please include the #DXTechN9ne Hashtag.

Question: What platinum/gold soundtrack did Tech N9ne appear on 14 years ago?