A year ago if you told Ubiquitous that CES Cru would be on the number one hip hop countdown show in the country, he probably wouldn’t of believed you, but the unexpected happened when BET premiered the music video for “Juice” on 106 and Park, sending the formerly-local duo into the national spotlight.

The music video from their Strange Music debut album Constant Energy Struggles is now up for vote against heavyweights in hip hop and R&B including Kendrick Lamar, Alicia Keys and Chris Brown. With Strange Music on their side, it’s only a matter of time before “Juice” gets in the daily rotation.

The day the video was set to air, we had a chance to talk to Ubiquitous only hours before the broadcast. Ubiquitous shared his surpassed expectations, the feeling of breaking the television barrier and he also tackled the idea of the possible fame that could result from this exposure. A few other things were touched on along the way (the tour bus has DIRECTV?)

Your music video is going to be on 106 and Park today, what does this mean for you? Is it a validation? CES Cru’s music has never felt like a straight up act of appeal towards mainstream audiences, even while it is accessible. Is this something that you expected to happen in your dreams of your career?

I totally wasn’t. It’s not a contrived idea or something that I premeditated. I never thought to myself “Ah this is going to get on BET…” You know what I mean? Never. Never once. Shit never crossed my mind which is maybe why it’s happening! It’s a dope validation. To be on 106 and Park is something I’ve been watching for I don’t know how many years. It’s pretty cool. Just like the MTV thing but I don’t want to take light off of BET because that shit’s tight. 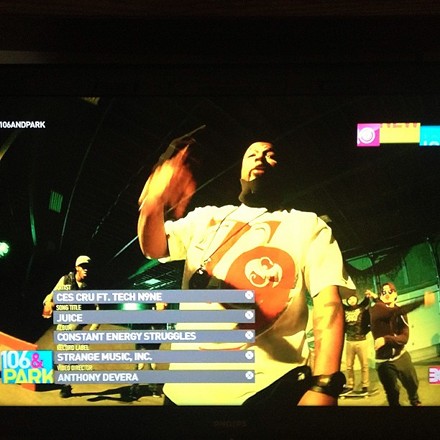 Are you going to watch it?

You guys don’t get cable.

We have DIRECTV buddy.

Oh, it’s super fresh. I appreciate the nod. I don’t need to be entirely oblivious as to why we’re on 106 and Park. I guess I’d like to think that it’s just good music. But yeah, I don’t know why us – but fucking great, you know? We’ve been pushing the CES Cru brand for years and years and it’s a dream to break through to major media. I guess we’ll just see what people think of it!

How are your friends and fans back home responding to you being on the big TV? I can imagine they’re pretty geeked out.

Oh all the way on the big TV! These motherfuckers don’t know what the hell is going on with me! You know what I mean? I put it up on the social networks and shit and our fanbase is in tap with it but like, friends and family are not super aware! There’s just a handful of people that know that this BET thing is happening. I may blast it out a little bit today before it does happen so those that are in tap with my networks will know but yeah man, I haven’t had that conversation! None of my friends have blown me up like “Dude! You guys are on BET!” Nobody callin. Phone’s dead. You know? So…I don’t know. I think they’re sleep.

Is that disappointing to you?

You’re not waiting for text messages?

No. I’m not waiting for text messages.

You’re not staring at the phone, hoping that it rings from old friends?

No, mostly when the phone rings my anxiety goes up. I would say 90 percent of the time.

Because man you never know what’s coming next these days! Things are poppin’! It seems like every time the phone rings it’s something crazy. It’s not like I’m constantly getting bad news or anything but it’s just it’s sort of the feel of a roller coaster, you know what I mean? You’re going up a hill and you’re like “Oh man I’m about to drop down this big ass hill, it’s going to be fun!” but you might catch a little anxiety, you know what I’m saying? Like “Oh shit. I’m about to hit this hill, I’m about to hit this loop!” So that’s what it is.

Now at this rate you might not be able to go out in public without getting recognized half the time, is that something that would be cool for you?

Um…you know I feel a couple of different ways about it. It’s super cool for people to come up to me that they appreciate my music when I’m just walking around and doing stuff. That’s super cool. And this is pre-tour, I have experienced a couple times where I felt some-what violated because someone was approaching me, kind of bullying me for my time while I was with my kid and shit or if I’m out with a young lady, you know, and then people are encroaching on that. And I don’t mind doing a little picture or something like this but if turns into a five minute conversation, you know, it’s a little too much. I’m trying to entertain, whether it be my family or a nice young lady. So other than that man I love it, I love it when people come up and let me know that they’re about us. It’s a super cool feeling and I like to connect with my fans and especially like it when they say things that are poignant as opposed to random “Oh y’all tight! Y’all tight!” Like, that’s cool, but say something. Say something that means something. Tel me that “Seven Chakras” has helped you get through your relationship problems. Like that’s tight.

Have you been touched in ways that make you feel uncomfortable during the tour?

Is this like a Catholic thing? What do you mean?

No, I mean have you been groped by the female fans?

Have I been touched in ways that bother me…um…you know a couple girls have tried to pull a little slick shit, you know what I mean? And I wasn’t bothered by it, I’m flattered but I done had some girls just like kind of grab my ass or something like that. So I’m like “Okay…” you know? “Cool…cool. A little conversation goes a long way. Hey!” You know? “You want to talk to me, talk to me, or just come over here and grab my ass…I guess.” But no I haven’t had any Danny Brown experiences with you know, fans trying to deliver fellatio while I’m on stage rapping, nothing like that.

Well I think the venues were too big for that, but back to the subject at hand here, this news that you’re going to be on the big TV, how has Tech responded to the news?

Tech is ecstatic! I feel like honestly him and i really haven’t gotten to have the celebration conversation yet. We talked about it briefly a few minutes the other day and we were just all smiles about it really. I’d like to clink glasses at some point and toast to that shit so I haven’t had the opportunity to do that yet, but I know that that’s the weather though. Everybody’s super excited, super happy that we’re breaking through on that level.

It’s kind of Strange but this video is arguably Tech’s most accessible look for people watching BET and it’s through you guys.

Right and I’d like to think it’s the same for us. Our most accessible look is through him, you know what I mean? It’s kind of reciprocal in that way. Being not only part of the song itself but being our masthead and label and giving me the opportunity to even get where I got. I don’t know! It just sounds like good business to me.

Before we get out of here, is there anything you want to say to the fans?

Yeah I got something to say to the fans. Just…thank you. Thank you to everybody who has opened themselves to me on tour. ALL over the country, just all over the country. There wasn’t a place that I went where I didn’t feel genuine love. So just thank all the fans for coming out and expressing that and for saying things to me like “I love Tech Nine, I love strange music, but I’m here to see YOU. I”ve never seen CES Cru, I want to see YOU tonight. I’m excited about Y’ALL.” That’s DOPE. Not to feel like the sideshow even if we are opening I get this main attraction feel from some of the fans, it’s dope.