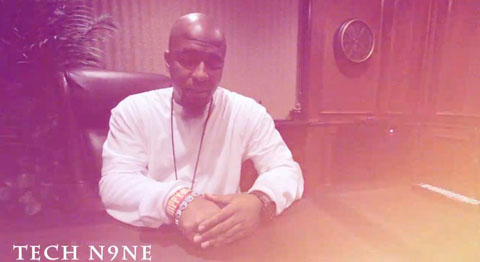 When it comes to emcees other than Tech N9ne that are quick-spitting, hyper-intricate, and actually have something to say, it’s pretty much impossible to leave R.A. The Rugged Man’s name out of that short list, so it comes as no surprise that the hip hop Gods eventually brought the two together.

On “Holla Loo Yuh” from R.A.’s recently released Legends Never Die album, Tech and Krizz join R.A. in a three-and-a-half minute burst of quickfire lyricism, a style that all three emcees are comfortable enough in to call home.

In a recent drop for R.A.’s new album, Tech shares his thoughts on New York vet’s abilities as an emcee, his overall attitude, and what it was like to work with him.

Hip hop heads around the world can only sit back, enjoy Legends Never Die, and pray to the almighty hip hop Gods that the universe brings these two explosive emcees together for…we don’t know…like, 1,000 more tracks? That’d be great.