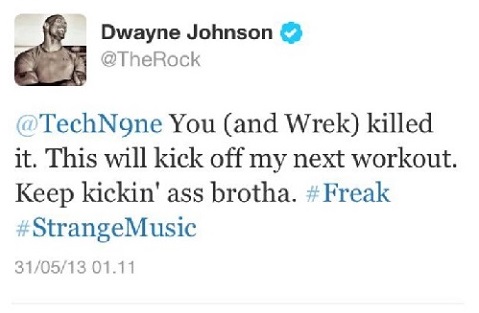 When the Great One shouts out your latest single, you know you’re doing something right.

Hot off the heels of the official music video for Wrekonize’s “Freak” featuring Tech N9ne, Dwayne “The Rock” Johnson once again paid his respect to Strangeland by giving the sexually-charged anthem a big nod over Twitter.

Fans may recall The Rock’s previous shout outs to Tech N9ne and Strange Music, including last summer when the Hollywood action star placed Tech N9ne among his top five emcees.

“Freak” marks the second single from Wrekonize’s The War Within and with the album just under a month away, it looks like word is quickly spreading about one of Miami’s sharpest spitters.