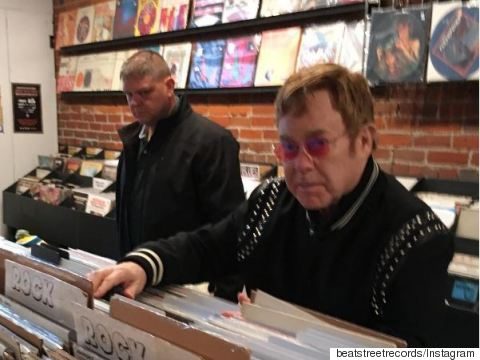 Anyone who has been on the internet ever, knows to approach anything with both optimism and steadfast skepticism. So, when this came into our mentions, we were cautiously optimistic.

Sir @eltonofficial digging at @BEATSTREETrecs today. He asked the staff if they had any @TechN9ne #Vancouver pic.twitter.com/pWUKtY1ZX0

Elton John is one of the most legendary recording artists ever, but he’s not the first name you associate with hip-hop. Additionally, there’s famous, then there is Elton John famous. So, yes, Strange was excited, but you can understand the skepticism. Once it was reported by the Canadian Broadcasting Corporation, who interviewed the record store manger, however, there was no doubt that Elton is a Technician in the making.

“He asked my boss if we had any Tech N9ne, like, the gangster rapper and I was not expecting that,” Tomchyshen laughed, referring to the Kansas City-based artist. Unfortunately, Beat Street was sold out of Tech N9ne, so John settled for a stack of albums from the 1980s British pop band Scritti Politti instead.

We weren’t the only ones to catch wind of the amazing request. Every publication from XXL, to HotNewHiphop, to HipHopDx, to Billboard, even Huffington Post, noticed Elton John’s interest in Tech causing a ton of almost-incredulous excitement!

I knew Elton John was cool as fuck already, but him walking into a record store and asking for Tech N9NE made him even cooler.

Elton John’s infatuated with RTJ and has now been spotted in the wild coppin Tech N9ne. Elton has better taste in music than my friends 😕

Everything about this story is amazing, except for the fact that Elton John left without any Tech N9ne. Luckily, Tech himself, made sure Elton John’s collection won’t be Strange-less much longer. In a quote, reported by the KC Star and posted to Instagram, Tech discussed how much it means to him to have Elton John’s ear, as well as a plan to get him started on a Strange Music collection.

I was totally flattered. When a musician of his magnitude walks into a record store and requests your music – that’s validation for songs like “Who Do I Catch Now.” When you write a song like “Who Do I Catch Now” you already know you are supposed to catch everybody, but you don’t know who is coming next. Its validation you are doing it right this whole time. I’ve been knowing that, but when you see something of that magnitude, it makes you smile like really “Who Do I catch Now”? When I woke up that morning, I had a text from Mackenzie Nicole, it was in caps and it said “ELTON JOHN! Who Do You Catch Now?” I was like, “I was thinking the same thing!” I knew way before “Who Do I Catch Now” that I was going to catch so many because my music is supposed to be for everybody and this is another step in the right direction. Thank you, @EltonJohn. Such a  wonderful musician pretty much acknowledged that he thinks the same thing about me. Same thing with Dwayne Johnson – @TheRock, it keeps on going. I don’t know what music he was looking for, but my attorney knows his manager so he’s gonna get all the vinyl and the newest LPs just in case he was looking for one of those. We’re gonna give him everything. So Elton John, you don’t know this, but you’re gonna get everything plus! Thank you so much. I can’t wait to meet you and talk music…and talk a collab. Love, T9!

Who Does Tech Catch now? The better question is, who will Tech catch next?!